by rickf
I looked at that trigger for mine but then I saw quite a few poor reviews about failures after very short periods. I am assuming you have not found this to be true?

You can go too light on a trigger to the point of dangerous. We had a guy bring an AK to the range with a trigger that probably measured in the 1 lb. or less range. Well due to a series of errors on his part he could have killed damn near everyone on the line! He loaded in a 30 round mag, racked in a round and realized he had forgotten his muffs. So he laid the gun on the bench WITHOUT the safety on! Just the bump of hitting the bench triggered it and after that the vibration kept it going for all 30 rounds! Asses and elbows all around!!!! Thankfully the gun was trapped between a heavy bag and an ammo can and generally stayed aimed downrange. I was the range master that day and I told him to pack it up and NEVER ever bring to the range again set up like that and we checked all of his other guns before he was allowed to even load them. They were light but not excessive. He told us it was an experiment, one that obviously failed and could have resulted in many people hurt or killed.

I have had satisfactory results with this trigger. My thoughts on some having trouble center on 3 scenarios.

1: A receiver with the axis pins drilled off spec. It is neither unusual or necessarily harmful to have to drive the pins in with a few light taps, but not pins requiring excessive force to install. Result is undue pressure on the pins resulting in undue pressure in the trigger mechanism.

3: Using standard pins instead of the anti walk pins. Under this scenario, you must extend the lock screws at the bottom of the cassette to put tension on the pins so they will not "walk out". Too much tension could once again bind the trigger mechanism.

The common thread with people having trouble with installation and forcing it. And this applies to all drop in cassette type triggers. Look on line at some of the big forums such as ar15.com and you will find people having trouble with almost every trigger out there. And what you will also find is that most if not all problems were encountered after a self install. What you will also find is that the more expensive triggers will not have near as many problems. My opinion is that the more expensive the trigger, the more likely someone is to install them correctly.

As your story suggests, there are just as many "shadetree amateur gunsmiths"

Another problem that can cause trigger problems, and this applies equally to all firearms, is dirt and grit. I clean my firearms every time I shoot them, and I always use compressed air to blow dirt and grit out of the trigger mechanism. .22 lr is notorious for this, but look in the trigger mechanism for almost any semi automatic firearm after shooting and you will see at least some brass residue. This is brass that is shaved off the cartridges either during loading, unloading, by the feed ramp, magazine lips, ejector, or extractor. Using compressed air is the best way to get this out. My father was in an armored unit in WW2, and they always had access to compressed air. They always blew out their personal weapons and the mounted weapons when cleaning. He continued that habit after his service and passed it on to me.

by rickf
Good info, I just dumped my monthly allotment on some 62 grain ammo to see how it shoot in my 1/8 barrel. The 55 grain was not bad but the 62 should match up better. If it works I will buy a couple thousand rounds, that ought to wake up the Censors in NJ!

by Surveyor
Switched to a 2-stage Rock RIver NM then a Geissele years ago. I don't think I could ever go back to single.

by m3a1
If that fellow's AK ran away he's been monkeying around with the sear and that is an awful BIG no-no.

I had a buddy with a badly worn M1 Garand that had a trigger group that was just awful. Pull the trigger in just the right way and it would crank off three rounds in succession. None of us could hold it in just the right place to go all eight rounds but I will admit, it was interesting but it did require you to depress the trigger to achieve that result. Yes, he got it repaired...and quick.

IMHO having these ridiculous bump stocks or, modifying triggers to the point where they get into what is plainly illegal is for people who have no respect for the rest of us who want to have and handle firearms in a legal and professional manner. (end of rant)

Even if there was a legit necessity for such things, a person would have to be hauling ammo all day just to try to hit something because accuracy is really just gone gone gone. Praying and spraying isn't what shooting is all about.

by raymond
I think a single stage is the best option for a defensive gun.
I think a two stage is the best option for a target/competition gun.
I have a JP Enterprises 2 stage on an old large pin Colt H-Bar Match Target from the early 1990's. Back then, the JP Enterprises was just about the only game in town. It is very light, but I only use it for CMP shoots at the range, although it has been years since I've competed.

by acudanut
Nice collection there. !!
Mine has the Later fiberglass body that they was used later in Vietnam. The wood would swell and not last in the Humid/wet environment. Wood also made it heavier. 2 cents.
Your AR looks like a pieced together rifle, with the finishes in different colors. Hmmm. What is the story ??

by raymond
I have a Springfield Armory M1A (semi auto M14) with a Krieger stainless steel barrel. 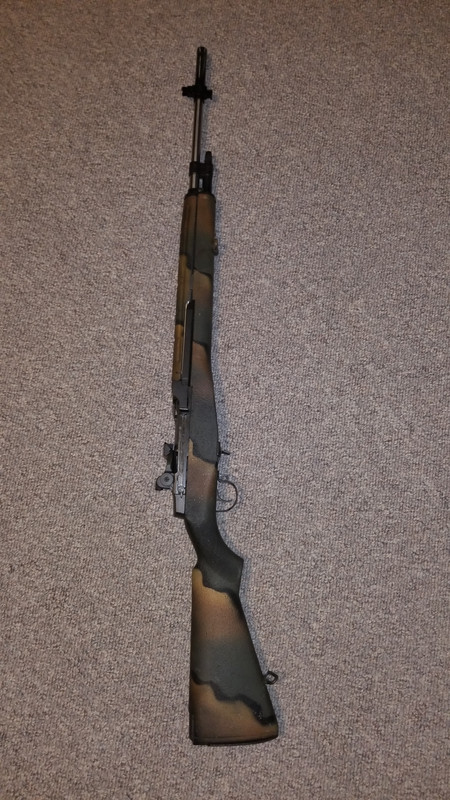 by Mark
I have a M1A , aw, lost my thought process so my post can get deleted,

by acudanut
Does anyone know when the U.S. Military went to 30 Round mags on the M-16 ? It seems odd that the USSR had 30 round mags, long before we did.

by Surveyor
Vietnam experience (as well as every conflict prior) lead(s) to troops wanting ever larger capacities. From reading, the 20 rnd was a direct replacement for the 20 rnd mag of the m14 which replaced the 8rnd clip.

Production of the 30-round magazine started late 1967 but did not fully replace the 20-round magazine until the mid-1970s.
-Bartocci, Christopher R. (20 July 2011). "Feeding the Modern Semi-Automatic Rifle". Americanrifleman.org.

by rickf
I despised full auto shooting! Spray and pray, All it did was waste ammo. The ONLY time it was called for was when you needed the enemy to stay down so your guys could advance or get out. Other than that I was one shot one kill. Or tried my best but no full auto. I watched a video of a guy in Iraq or Afghanistan standing in a cut behind a berm and just constantly feeding 100 round soft pouch belts into a M249. over a thousand rounds! In five minutes he was out of ammo. And guess what? It took the enemy about 3 minutes to figure that out and all hell broke loose because they now knew this idiot had nothing to mow with any more.
All times are UTC-04:00
Page 4 of 5
Powered by phpBB® Forum Software © phpBB Limited
https://www.phpbb.com/